gvSIG CE  and Survey2GIS joined this year's OSGeo-Park at AGIT 2015 where many interested visitors dipped into the latest trends in free and open source GIS software (FOSSGIS). Coming from all backgrounds people highly appreciated the friendly co-presenting of FOSSGIS-projects as well as participating in workshops. The Survey2GIS hands-on introduction attracted a good number of interested people despite some impressive outdoor UAV demonstration.
Using free and open source software including Survey2GIS and gvSIG CE in archaeological excavation activities and heritage conservation has been a well regarded topic at the special forum "Archäologie und GIS".

The Open Source Day at the Expo Forum on Friday yielded lively and fruitful discussions among FOSSGIS experts from all projects and users of all stripes.
Still, future efforts have to be made in disseminating the benefits of FOSSGIS in general besides promoting individual projects. The best place to do so is next year's co-conference of FOSSGIS and AGIT in Salzburg. See you there!
Posted by spatialjoe at 1:37 AM 2 comments:

Karsten Vennemann from TERRAGIS made a web map which shows the gvSIG CE downloads and where are they coming from. You can read more about this here.
We would like to thanks TERRAGIS for this great contribution.
Best regards!
The gvSIG CE team.

The first beta version of gvSIG CE 1.0.0 has just been released:

All provided packages are for 64 bit operating systems.
Read the full announcement here

There have been many exciting changes, improvements and new features since the Technical Preview was released. So please, download, test and report your findings to our users mailing list

Dear All,
we are set to release a new version of gvSIG CE by the end of this month. Most probably, this will be a beta version, hopefully leading to a release candidate and then a final version soon.
A (draft) release announcement with some of the exciting new features can be found here.

One of the biggest changes will be a complete renovation of the main menu. Icons and menu items will no longer be hidden, everything has been re-organised to be more intuitive and we will provide a new set of clearer, larger and more consistent icons.

Here is the problem: The new menu system includes hundreds of new GUI strings (the names of menu items and toolbar icons,tooltips, etc). So far, these have been translated to English and German, but we lack translations to the other (still) supported languages: French, Italian, Spanish and Portuguese.

So: If you speak any of these languages and would like to contribute a few hours of your time to this project, let us know so via the users mailing list. Maybe we can make all translations available in time for the beta release.

Best,
Benjamin Ducke
Posted by test at 12:57 AM No comments:

We are pleased to announce the support of EPSG 5806 in gvSIG CE. This is a cartesian coordinate system used in engineering environments (for example, surveys) as an XY, non-world and unprojected coordinate reference system. We began this task by evaluating the problem [1] and finally we produced a document with a full analysis as well as the possible solutions [2].
After some work, we managed to implement a good solution in the short term, minimizing the efforts. We leave the integration of GeoTools as a possible solution in the middle-long term [3].
This feature will be available in the next gvSIG CE release.
Thank you very much to David Bibby from Landesdenkmalpflege Baden Württemberg for supporting this feature and to Benjamin Ducke for its contribution and further development.
A continuously updated release announcement, detailing the progress on new features and bug fixes can be found here
Best regards
Victor González

Email ThisBlogThis!Share to TwitterShare to FacebookShare to Pinterest
Labels: EPSG

Another nice feature for gvSIG CE: we have implemented SQLite support as a new
gvSIG CE extension.

In order to add the layer/table, a new wizard has been created. This wizard is very
similar to the wizard for simple files but adds some extra inputs on the bottom to
specify which of the tables contained in the SQLite file must be loaded and which
geometry column to use if it is going to be loaded as a layer: 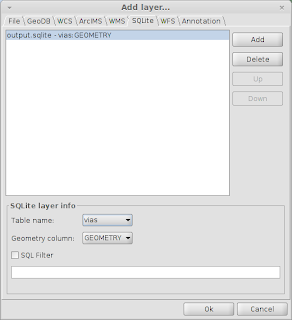 Moreover, the SQLite support is not reduced to data visualization. It is also possible
to edit SQLite data by using the common editing tools for layers and tables. For this
purpose, the new extension uses GDAL/OGR to access SQLite data, which is a guarantee of stability and performance.

The GDAL version we have used for this development is 1.10. This feature will be
available in the next gvSIG CE release.

Email ThisBlogThis!Share to TwitterShare to FacebookShare to Pinterest
Labels: SQLite

Dear all,
the borders of internal windows were just one pixel thick, so it was very hard to e.g. resize a view or attribute table window.
With this update you should see the difference immediately. The broader window borders apply to all resizable internal windows in gvSIG CE (views, maps, attribute tables, etc.).
The updated Plastic XP theme has much wider borders and uses a thin black outline, which makes it easier to tell apart the contents of overlapping data windows.